Gianpiero Boschero started off by explaining that he had become involved in lacemaking as a result of his interest in the history and culture of the valleys in the Alps where Occitan is spoken. He told us that lace has probably been made in Val Varaita for several hundred years, usually as lengths which were used to decorate the traditional headdresses worn by all the women. The ground was usually Point de Paris (Kat stitch) and cloth-stitch motifs in the ground were sometimes outlined with a gimp. Most of the patterns either had no names or, more likely, the names have been forgotten. A bolster pillow was used without a pricking although there might be a line of thread on the pillow to help keep the work straight. Linen thread was used, often from flax grown and processed in the valley. The traditional patterns were learnt and copied, occasionally with small changes either to add variety or by mistake. The simplest lace needed ten bobbins, and the most complicated over two hundred. As the wearing of traditional dress and the lace-trimmed headdresses declined in the early years of the 20th century, lacemaking also declined. 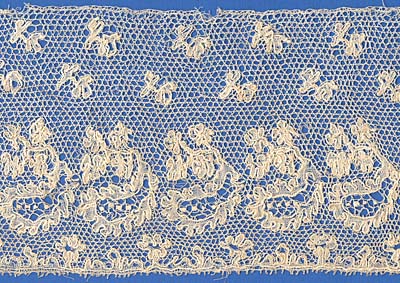 I was shown a picture of a headdress from Bellino with lace that needed over 200 bobbins. Much to my surprise it was the same as this lace which I was given by my friend, Gilian Dye. She has no idea where it came from originally.

By the 1970s there were very few lacemakers left but, together with a friend, he was able to learn the basics of lacemaking from one of them, Margherita Estienne, who lived in Bellino. His main interest was in the traditional music and dance of the area and in the spring of 1985, while researching old musical instruments in Val Maira, the valley just south of Val Varaita, he came across a book of lace samples which Gino Lonaldelli, the mayor of Stroppo, had inherited from his mother, Maddelena Tholozan. He found that she had been part of a group of enthusiasts who in 1924 had opened a lace school in Bellino in the hope that this would help revive and preserve the lacemaking tradition. Here Maria Catterina Richard, the best lacemaker in Bellino, taught about fifteen girls every afternoon during the winter. The group also included two countesses, a businessman from Turin and the local priest, but the leading figure was Colonel Michele Celestino Bes who commanded the 2nd Alpine Regiment in Cuneo. He took charge of the marketing of the lace and it was his idea to put together two copies of a book of lace samples — one to be kept by Maddelena Tholozan in Bellino, the other by a representative in Turin. Each lace in the book had a number and a price per metre. Some of the samples were made by students at the lace school but there were also many from lacemakers who had earlier made lace for sale. It took Maddelena Tholozan a great deal of time to persuade these lacemakers to give her samples of their jealously guarded patterns even though it meant they would get a better price for their lace. The orders came to the teacher who then passed them on to the various lacemakers. For a while the initiative went well, but it eventually floundered because the few lacemakers available also had to care for families and help with work in the fields, making it impossible for them to fulfil orders on time. As a result the orders gradually ceased and the school closed in 1928. 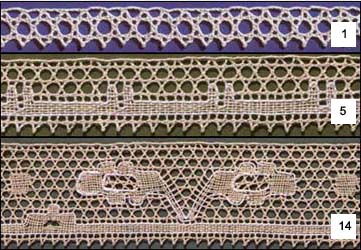 Three patterns from the Bellino sample book used in the courses given by the Pouiéntes d’Oc. The simplest, No.1 in the book, needs ten bobbins. These samples are worked in Fresia 30 linen thread using patterns redrafted by Gianpiero Boschero.

However, the book of samples had survived and in 1987 with the help of the museum in Cuneo, Gianpiero Boschero was able to hold an initial course teaching the local lace. A year later, together with his best students, he founded the association, Pouiéntes d’Oc, with the aim of studying and teaching the traditional patterns. The lacemakers today work with line drawings for prickings instead of working in the traditional freehand way. This helps them to learn more quickly and also means that the lace is more regular. Gianpiero Boschero’s main interest is in producing technical drawings and prickings from the old laces and he prefers to leave the actual lacemaking to others. He gave me several beautifully produced pattern sheets which are used in the association’s courses, four of the typical chunky bobbins which he had turned himself and some leaflets about the history of the lace. In exchange, I had some spangled bobbins, a lace bookmark and a copy of my ‘Introduction to Bedfordshire Lace’ for him and the association. 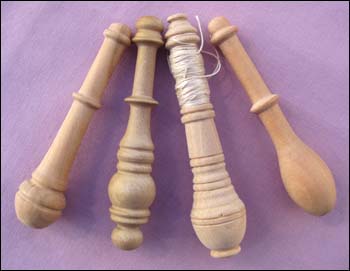 The bobbins I was given by Gianpiero Boschero — they are very similar to old ones that I’d seen on a pillow in the museum in Cuneo.

This article first appeared in the Scottish Lace Newsletter of December 2007.