My Visit to Val Varaita Part I

Early in 2007 my son, Ian, sent me pictures of lace pillows which he’d seen in the Varaita valley in northern Italy (see ‘Some Italian Lace’). So when we visited him in Turin later that year, I was delighted that his partner, Margo, had been busy making arrangements for me to visit some of the lacemakers there.

Our first stop was the Civic museum in Cuneo where we saw bobbins, pillows and lace from Val Varaita. Much of the lace was wide edgings with Paris ground made with linen thread and used to decorate the traditional headdresses and other items of dress. We also saw some girls’ headdresses edged with stiff lace made of horsehair. 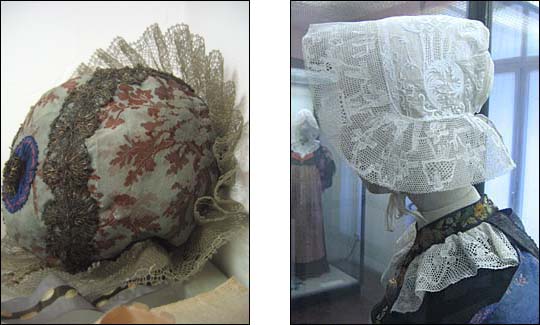 Then we drove up the valley to Casteldelfino where we visited the Agriturismo ‘Semitoun’. The proprietor first showed us round the small museum in the village (Ian was very interested in the old skis there), and then with Margo translating I was able to ask his wife about her lace. She showed me the pillow she was working on at the moment making an edging for the church. As you can see in the picture, she only keeps the pins in place at the edges, and moves the others up as each line of ground is worked. I had a pair of spangled bobbins with me as a gift, which was very well received. In return I was given two of her bobbins (cut off the pillow shown in ‘Some Italian Lace’), two lengths of lace and some patterns. 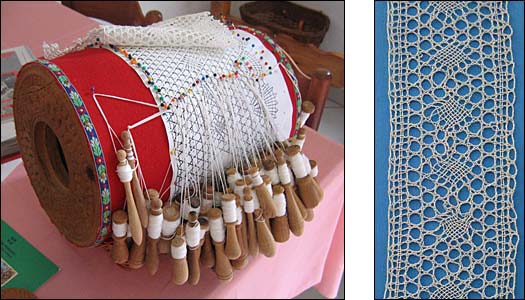 Left: The pillow with work in progress at Casteldelfino, Right: One of the lace lengths 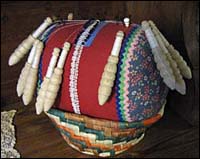 Our next stop was Chianale at the head of the valley very close to the French border. We stayed at an Agriturismo run by a French woman and while chatting found out that she was learning to make lace, although she confessed that she didn’t have enough time to make much progress — but she did have two lace pillows! The following morning, after having a wonderful walk through Alpine meadows full of flowers, we had a delicious lunch at the ‘Laghi Blu’ where we saw the lace bobbins and pillow that Ian had photographed for me in January, before driving back to Cuneo where Margo had arranged for me to meet Gianpiero Boschero, president of ‘Pouiéntes d’Oc’, the local lacemakers’ association. 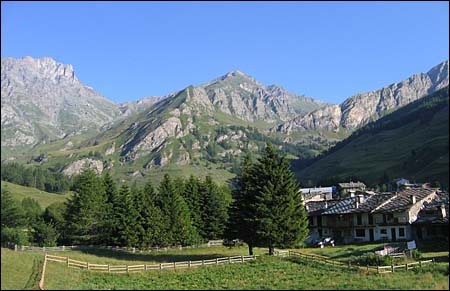 This article first appeared in the Scottish Lace Newsletter of December 2007.