Freehand lace can be defined as “Lace made by working directly on the fabric of the lace pillow, without using a pricking and with very limited use of pins”. 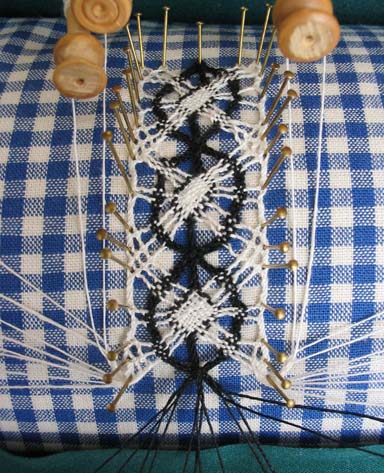 The picture above shows work in progress on a copy of an old lace. I am working directly on the fabric using the lines of the fabric as a guide for placing the pins at the edge of the lace. I did not need to use pins in the centre of the lace although I did have to tension the threads carefully. The fact that I was able to reproduce it using freehand techniques indicates that this is probably how it was made originally.

In the past a lacemaker wishing to make a new pattern of freehand lace would have worked from a small piece of lace, experimenting with the pin spacing to get the effect she wanted with the thread that she had available. Nowadays a lacemaker wishing to reproduce a piece of freehand lace would be more likely to work from a photograph, as I did with this lace. The original lace is on a woman’s jacket from the 1620s in the Victoria & Albert Museum in London. It is illustrated in Lace, a history by Santina Levey (Plate 179B), but you can also see pictures on the museum’s website (click or tap on the photo there labelled ‘waistcoat’ — the lace is at the back of the jacket). The lace is black and white, and from the image on the website I was able to make a sketch of how I thought it had been worked (above right). I had no idea of the actual size of the lace, but decided to use the squared paper under the sketch as a guide, with one square equivalent to a square of my check fabric. This worked out very well with Bockens 35/2 linen — six pairs black and ten pairs white.

It was difficult to see how the edge was worked so I decided on a simple plait, and the diagrams on the right show how the pairs which crossed from side to side of the lace were linked to this plait. I first tried placing the pin within the plait, and then above or below the join — the latter seemed to give a smoother edge.

The black pairs started with a six-pair crossing and were then plaited to the right, to the left and straight down, the latter plait then dividing around a central diamond where the white pairs cross through each other in cloth stitch. I tried two different six-pair crossings from the Technique and Design of Cluny Lace by L. Paulis and M. Rutgers (right) — both worked well.

The main difficulty with making this lace lay in finding out when it was best to ease the threads to where they should be. In the first two repeats, where I was still experimenting, the central diamonds where the white threads cross are rather misshapen, but they improved after that. I found that provided I made sure that the left- and right-hand corners of the diamond, where a pair from the edge exchanges with a pair in the lozenge, were ‘set’ correctly, the rest of the pattern worked out well.