Some years ago my son, Ian, sent me the photo shown below. He was living in Italy at the time and had been out skiing with some friends in Val Varaita, a valley in the Italian Alps near the French border to the south-west of Turin, and when he saw a lace pillow in the trattoria where they were eating he knew I would be interested.

The lace looked similar to that made in Queyras in the French Alps and when I found Val Varaita on a map (here in the non-abbreviated spelling, Valle Varaita) there was Queyras on the other side of the border. When I told Ian he said “It makes sense that the lace is similar to that in France, as this is one of only a few valleys where there is a paved road pass between Italy and France — so historically communications must have been better than usual — it’s also more in this part of Italy/France that Occitan was spoken — a local language which also spanned the border — all the way down into Liguria, I think.” 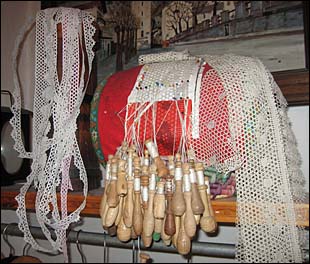 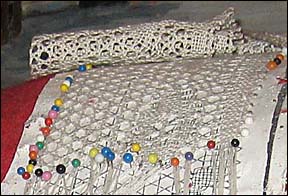 Ian also sent me a card with the name and address of the trattoria and a web address from which I eventually found a web page all about the lace in Val Varaita — it’s in Italian with some lacemaking terms in French. My Italian is very limited but I did manage to make out that traditionally the lace was made directly on the pillow, without a design and without a pricking — in other words it was a freehand lace. However, the association Pouiéntes d’Oc has now introduced the use of technical diagrams so that the lace is quicker to learn and can be made more accurately. In the close-up of the pillow you can see the technical drawing under the lace although the pins are only at the edges — another feature of freehand lace. 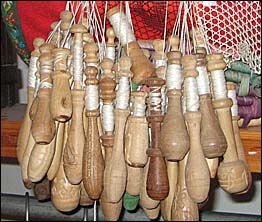 Before he sent me the photo Ian told me about the bobbins — “They’re not like yours at all, they’re quite large and haven’t got any rings of beads, but a lot of them are decorated with carving. In the close-up of the bobbins you can also see that the pillow is sitting in a shallow basket.

Two weeks later Ian and his friends went to the same valley but to a different village, Chianale, where they stayed in the ‘Laghi Blu’. He wrote and said “They also have some lace, not so much lace, but some cool bobbins. I asked, but neither the owner nor her mother made lace, so don’t know much more... see the pictures — unfortunately had to take them through glass.” (I had primed him with questions as he said they might be going back to the same valley.) 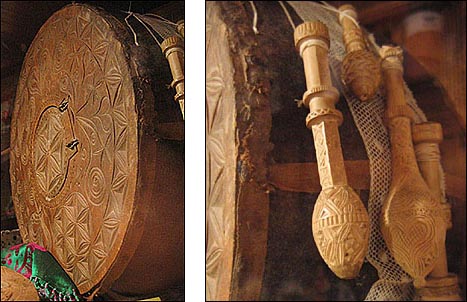 The pillow and bobbins in the ‘Laghi Blu’

But that isn’t the end. On a subsequent visit to Ian in Turin, we made a trip to Val Varaita so that I got to see the pillows and bobbins myself and learned about lacemaking in the region. This is described in the two other articles, the first of which you will find here.