Robin, a friend of ours who lives in Lyon, France, enjoys exploring the bric-a-brac in second-hand shops and stalls, and when he found the ceramic box shown above, he realized it might be related to my interest in lace. He was able to buy it for €10 and gave it to me as a present.

The bobbins and pillow on the lid are clearly of the French type, and it looks as if it was designed to store bobbins, although the ones in the photograph are mine, and did not come with it. It has no manufacturer’s mark on the base, and the inscription on it — ‘Charpin’ — didn’t reveal anything relevant on an internet search. Ferdinand Charpin was a French actor (d. 1944), and Pierre Charpin is a contemporary designer, whose ceramic works are a little more avant garde than this.

My next step was to add a page to my website with pictures of the box and ask members of the Arachne lace list if anyone had seen anything like it before or had any idea when and by whom it was made. Almost immediately I had four replies — from England, Australia, Sweden and the USA — all from lacemakers who had similar or identical boxes. The boxes in Sweden and the USA were decorated like mine but the other two were decorated with flowers and had written on them on the base or inside the lid ‘Chambre Syndicale, Haute.Loire, Patissiers.Chocolatiers’. If you're familar with the geography of France you'll know that Le Puy-en-Velay, an important French lacemaking centre, is in the Haute-Loire Department. 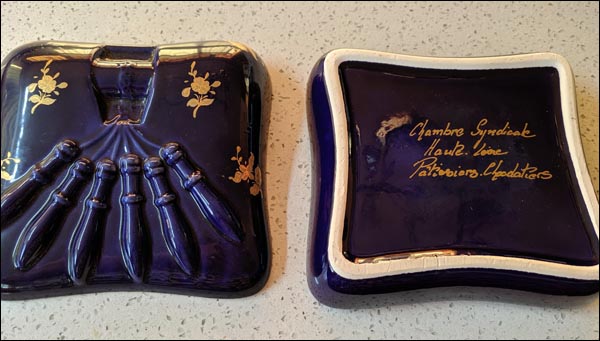 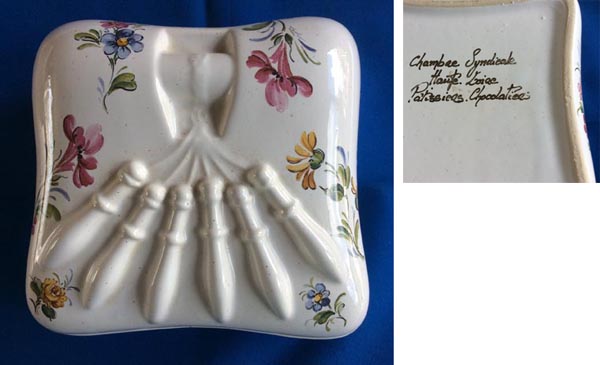 The small card that belonged with the white box with flowers was illustrated with a box decorated like mine and had a picture of the original contents — chocolates decorated with lace bobbins!

And here is a translation of the text on the card: Almonds coated in caramel, wrapped in delicious praline, and the whole enveloped in a layer of chocolate embossed with a bobbin motif. This delicious confection is produced by the Chocolatier's of the Haute-Loire and dedicated to our grandmothers. It is presented in a china box in the shape of the lace pillows on which our ancestors, with patience and dexterity, produced the exquisite laces known as “dentelles du Puy-en-Velay”.