A Fragment of Carrickmacross Lace

I came across this piece when I was at an Embroiderers’ Guild Regional Day where I’d been asked to put on a display of my lace. It intrigued me because at first sight it looked like point de gaze, and it was only when I looked more closely that I realised it was Carrickmacross, with a design inspired by point de gaze. Incidentally, this piece cost me £4 but it did come from a dealer who knew something about embroidery and lace. 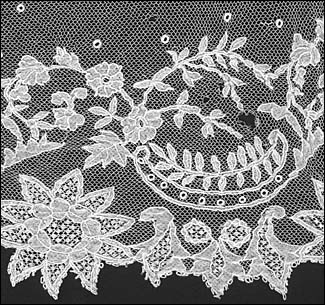 Carrickmacross, an Irish lace, was developed in the nineteenth century in an effort to provide employment for young women in rural Ireland. It is an appliqué lace worked by first tacking a layer of machine-made net and a layer of muslin (or other finely woven fabric) to a pattern. A thick outlining thread is then couched down along the lines of the pattern so that the couching threads sew the woven fabric and net together. The unwanted areas of fabric are then cut away and parts of the net decorated with needle-run stitches — as at the lower edge of this piece. Other features are ‘pops’, small rings of buttonhole stitches worked in the net, and ‘twirls’, small rings of the outlining thread decorating the lower edge. 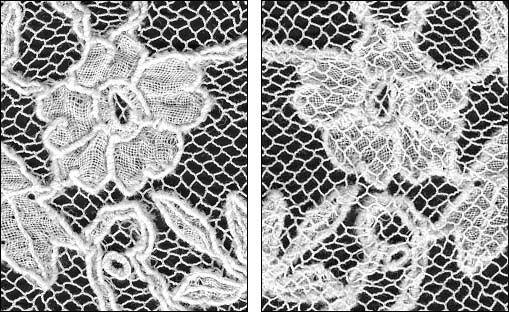 Left: Detail of the correct side; Right: The same detail from underneath

In the details above, shown at 4× magnification, you can see that the solid areas of woven fabric and the thick outlining thread couched down around them lie over the machine-made net.

The detail below, left — also at 4× magnification — shows part of a needle-run filling and twirls along the lower edge. The detail on the right, at the same magnification, shows two pops in the net. 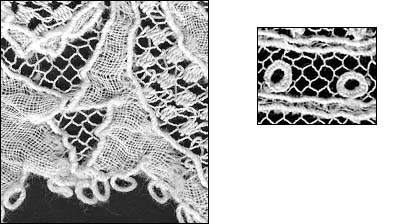