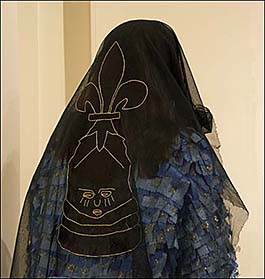 Living in Glasgow, I have been approached on a couple of occasions by students from the Glasgow School of Art — I have an article on another page about the Chinese Dragon I made for Eloise Dalby, a Visual Communication student. However, I was most intrigued when I received a request to design some lace for a final year Sculpture student, Amy Thornton, in an e-mail in January 2014.

When asked to elaborate she replied that she was interested in post-colonial issues, and that she wished “…to make work that looks at the role women play in African spirituality versus Christian visual signifiers.” She had been researching the religious connotations of certain uses of lace, and wanted to juxtapose this with an African Yourba textile patterning or a symbol used in West African masquerade. She explained that textile work was relevant to her sculpture because she “…used it in performance or captured it in some way for use in installations alongside other pieces or as a basis to larger 3-D scale pieces”.

Amy said that she wanted something as a large as could be made without being too simple, so I suggested that either Carrickmacross or Limerick lace would be most suitable, and she sent me a couple of ideas that she was considering, one of which was made up of repeated images an African mask. After meeting and discussing her project I did some trials in Carrickmacross. Having decided which fabric and net was best, Amy then asked if I could make a sample with a different mask — this one based on those used in the rituals of the West African Sande Society. Amy’s ideas for the mask design continued to evolve, and she finally decided on one which included a fleur-de-lys, stitched with gold metallic thread. 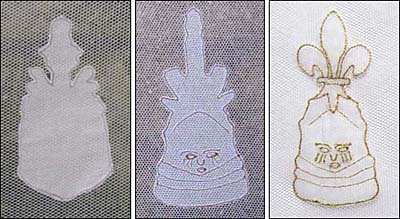 I made six panels, each with three heads, which were incorporated into banners together with laser-printed fabrics that Amy had also designed. Unfortunately there was a major fire at the Glasgow School of Art in May 2014, and Amy was one of the many students whose Degree Show work was destroyed. So, alas, I never saw the finished banners, although Amy later told me that they looked wonderful.

The students who lost work in the fire were offered Phoenix Bursaries to make new work for a degree show to be held in July 2015. I offered to re-make the lace panels but Amy told me that the lost work was specific to the dimensions of the narrow corridor in the Mackintosh building so she finally decided upon a single large mask using black net and organdie, and gold metallic thread which she would wear as part of a performance at the Royal Scottish Academy New Contemporaries 2015 Exhibition in Edinburgh. This took me less time to make than the six panels, even though I had to dye the net and organdie black before I could start! 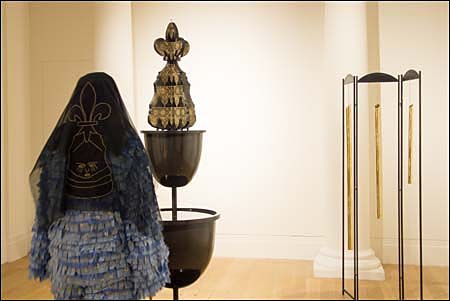 Part of Amy's performance at the Royal Scottish Academy Exhibition

The photo above is from Amy’s performance in Edinburgh, and there is also a video taken at the Degree Show in Glasgow.